I came across this recipe months ago, but didn’t have a chance to make until now.  Last week, I was so excited to bake it that even if I was tired from work, I happily took out my mixer and started whipping the eggs.

Sadly though, I made the biggest mistake by putting it on the second/lower shelf.  I didn’t expect it to rise as much and stick to the upper tray.  What a disaster!  It tasted delish just the same, although I didn’t get the “layering” that I was aiming for.

Today, a week after that disaster, I made this again just in time for Don’s homecoming.  He was away on business for 2 weeks and I want to give him something special when he comes home. And I am happy to report that everything went great this time around! 🙂  All smiles for me! Yay!

I also made a few adjustments on the recipe based on how it tasted the first time I made it. And also adjusted the cooking time to achieve the proper layering.

Anyway, this is called “Magic” because of the 3 layers it produces: sort of a sponge cake on top; a soft custard layer in the middle; and a dense cake layer at the bottom.

On medium speed, beat the egg yolks and sugar together until you have achieved a lighter color and the mixture has doubled.

Then gradually add the flour. You may want to lower the speed at this time to prevent the flour from splattering all over the place! Mix until fully incorporated.  Scrape off the sides with the spatula, too!

Next, slowly add the lukewarm milk and adjust speed to medium and whip up until well combined.  Scrape off the sides and the bottom of the bowl to make sure that everything is mixed well.  Set this aside.

If you are using only 1 stand mixer for this like I am, make sure that the mixing bowl and whisk attachment are clean and dry.  Any hint of moist or water will affect the whipping of egg whites – may not form peaks at all.

Start on medium speed.  When egg whites are frothy, gradually add the 1 Tablespoon of sugar you have reserved.  Let the mixer do its job and wait until stiff peaks form. 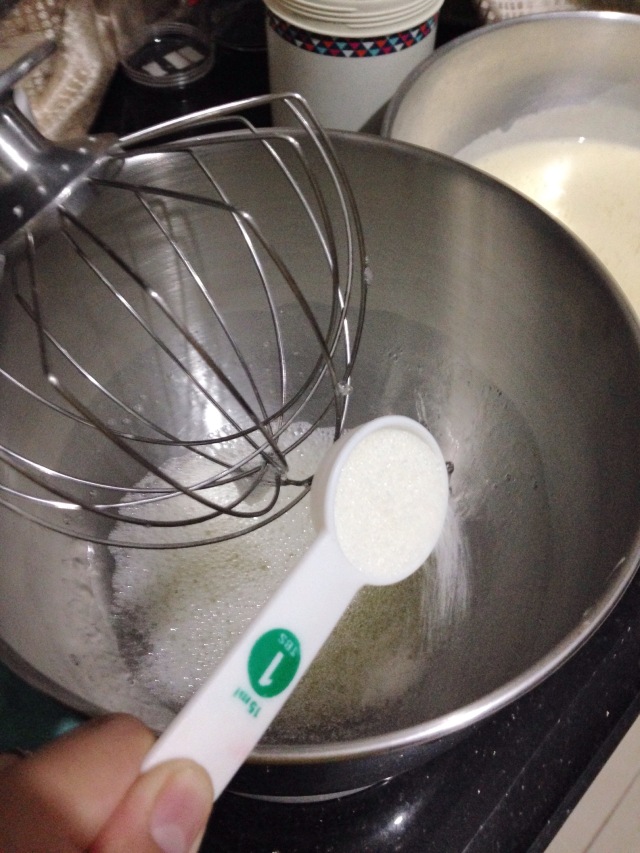 Fold the egg whites onto the egg yolk mixture in 3 batches.  I usually use a spatula when folding, and I did that the first time I made this cake.  However, it was harder to eliminate the big lumps of egg whites.  So I gambled and used the whisk attachment to fold in the egg whites.  Being extra careful so as not to “kill” all the air that the egg whites hold.  It was actually easier and my batter stayed fluffy!

Pour the batter onto your prepared pan and bake at 325F for 35 – 45 minutes, or until desired browning is achieved.  Remember that the middle part should still be “jiggly”.  The custard cake will continue cooking while it’s cooling down.

Let it cool completely, unmold, and dust with powdered sugar.  I like to put a lot of that! hehehe  Slice into serving portions.  You may opt to cool it inside the refrigerator if you can’t wait! =) 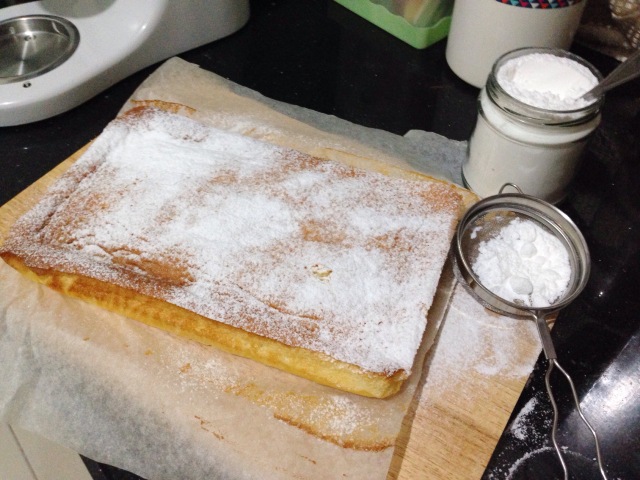 Directions:
1. Preheat oven to 325F. Grease and line an 8 x 8 square pan with baking paper. – I don’t have a square pan so I used a 10 x 6 rectangular pan.
2. Beat the egg yolks and sugar until you achieve a lighter color and the mixture has doubled.
3. Add the melted butter and vanilla. Beat for another 2 minutes.
4. Gradually add the flour and mix until fully incorporated.
5. Then gradually add the lukewarm milk. Beat until well combined. Set aside.
6. Beat the egg whites at medium speed until frothy. Add about 1 Tablespoon of sugar from the 1 cup of sugar the recipe requires. Beat until stiff peaks form.
7. Fold the egg whites onto the egg yolk mixture a third at a time until there are no big lumps seen.
8. Pour the batter onto the baking pan. Bake for 35 – 45 minutes. The middle part should still be “jiggly”.
9. Let cool completely. Dust with powdered sugar and slice into 12-15 portions.

NOTES:
* The temperature of the ingredients are important.
* Adding 1 Tbsp of sugar to the egg whites will help it form the peaks faster.
* If the top browns quickly, cover with aluminium foil and continue baking.
* Baking time may also differ depending on the kind of oven you have. I use an electric Convection oven, so baking time is less than the regular gas ovens.
* Other options: