I really need to start blogging real-time! Lately all I ever want to do is relax. Bum out. Just lie on my bed and let time pass. Haha

Anyway, school’s over. We had our repertoire (finals) on June 17th. After being extremely busy for 2 weeks preparing for that, my classmates planned to have a much-needed vacation. The rainy season has just started, but everyone’s still craving for some sun. I myself wasn’t able to go to the beach because of school. I like going to the beach off-season anyway.

I’m getting off track.

So the plan was to go to Pansol, Laguna, rent a private resort, drink booze, eat and bond. There were only 9 of us who showed up and with one tiny car. Okay, not tiny, but it wouldn’t fit all of us! We agreed on taking the bus. But then it started to rain! After some debate, we decided to cramp inside that tiny car! Kate, the owner, wasn’t too happy with that, but she didn’t have a choice. Technically, there’s only 8 of us, since the other one will just follow.

So the adventure began. There were 5 of us crowded at the back seat of this tiny sedan; 2 seated on the passenger side. Nevertheless, it was fun!

We arrived in Pansol around 3pm and the search for the right resort started! Another dilemma!!! After looking at 5-6 resorts, we were directed to this amazing resort that felt like it’s away from the city, had a huge space, and that we could stay until noon the next day. Usually you can only rent a resort for 12 hours and you have to check out by 7 or 8am the next day. After haggling, we agreed on Php 6000 for the stay and we’re only renting one big room.

This three-storey resort offers not only a swimming pool, but also some recreational stuff such as pool table, table tennis, a functioning TV, a fantastic view, a kitchen and grilling area, a refrigerator, a karaoke machine, and three air-conditioned room. Plus, the care takers were very kind and accommodating.

While we got settled in, others decided to buy food from the nearby market for food to cook for dinner. 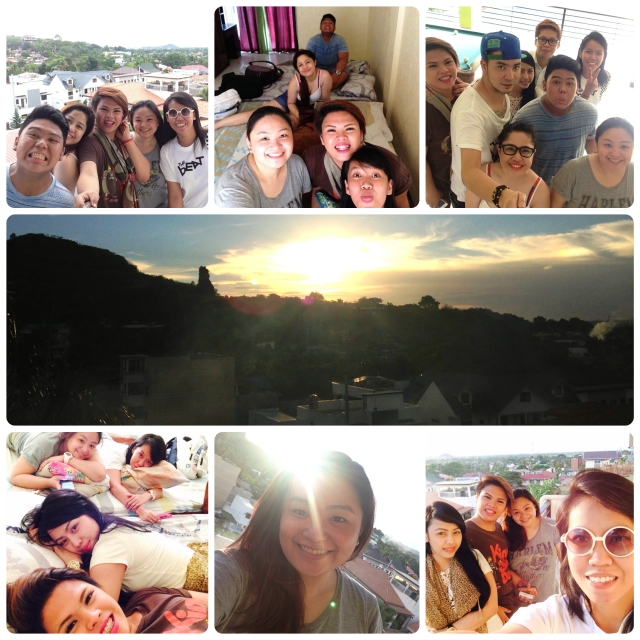 Chef Nat and her friend, Kim, also joined us, but they won’t be staying over night.  Dinner was simple.  No need for cutleries!  Thanks to JR and JM for preparing and cooking our meal!

After dinner, I decided to take a swim. The warm water was really relaxing. And you don’t have to worry about getting cold at all, even when you get out of the pool. The weather was just the right coolness.

The night ended roughly around 2:30am.

The next day, we were woken by JR (who got drunk first and slept really early. Read: 9:30pm. And yes, he’s the one passed out on the floor in the photo above). He bought and cooked breakfast for everybody. Actually, him getting drunk was a blessing! Otherwise, nobody would bother to cook breakfast! Haha

After breakfast, we went back to the room, tried sleeping again! We agreed to go to Tagaytay for lunch and will stay at Ianne’s house nearby to pass time before going back to the city.

Luckily, JR’s girlfriend will pick him up so we didn’t have to cramp inside Kate’s car!

We ate at LZM in Magallanes Square because everyone’s craving for some Bulalo. After that sumptuous lunch, we went to Starbucks, just right across the street. Waited for Chef Nat who will be joining us again!

Had an exciting chat while having coffee and took some crazy photos while waiting for Chef Nat.  By the way, thanks to my monopod with Bluetooth remote!  It was the easiest group photos we’ve taken!  No need to ask someone else to take our pictures!

We headed to Ianne’s for an afternoon nap. Lol

Going home, we had 2 cars available so we weren’t cramped inside Kate’s car anymore. I rode with Kate along with Ianne, Yelle and Larra. The others rode with Chef Nat. JR and his girlfriend left earlier to go to Batangas.

We left Tagaytay at 6pm and traffic on the highway was terrible! We had to amuse ourselves to (somewhat) forget that we were tired and really eager to go home. After a 4-hour drive, I finally got home at exactly 10pm!

It was truly an adventure. I would be missing these people now that class is over. And although there were only 9 of us there, I had a blast! 🙂