I just got back from a vacation in Seoul, Korea late last night. And I cannot NOT unpack even when I’m dead tired. It is just how I’m configured.  After sorting all our baggages, I took hot bath before finally going to bed at around 4am.
Anyway, I want to share to you the things I bought – I will categorize them based on where they were bought. I didn’t have much money to begin with so these are probably just basic. I’m still blessed to have been able to travel with family.

I bought this bag because the bag I brought with me gave out before we even boarded the plane! I want something light weight.  Aside from the obvious design, there is a small zippered pocket on one side and it has a pretty good magnetic lock.  This cost KRW 20,000. The vendor said, his mom makes the bags.  I used this for the rest of our stay in Korea and I was pleased with it.

There was a stall further down the road selling these for only KRW 10,000. But since I just bought a bag, I felt guilty buying another. My mom bought one for my brother instead. But then we went back to Insa-dong on our last day and found a store selling the same type of bags for the same price. So Don bought one for his nephew, one for himself and of course – I bought one for me! The branded ones with a similar design costs so much, I couldn’t let it pass. 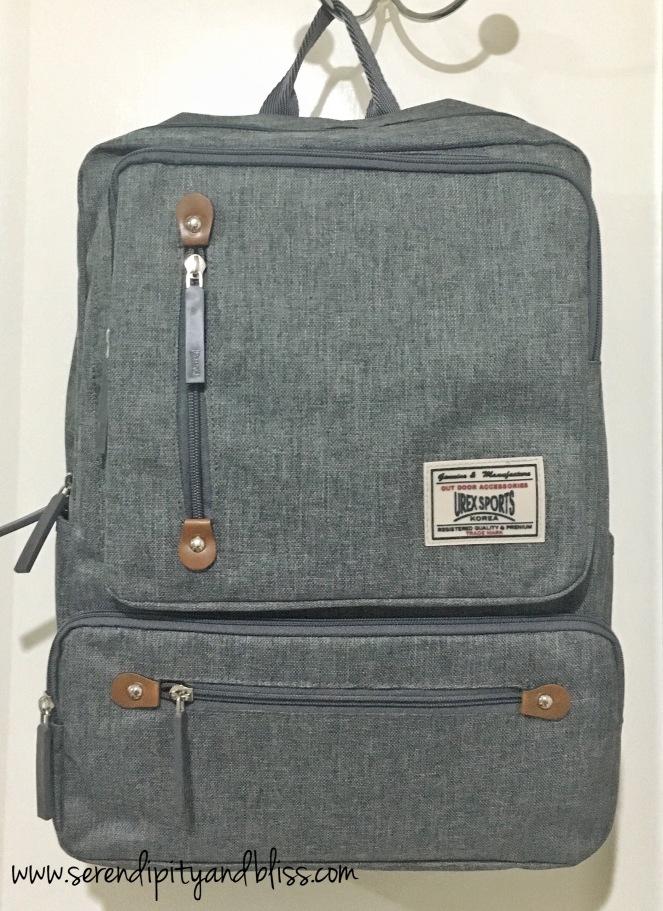 I bought the Iope Air Cushion XP in an Aritaum store in Insa-dong. It took me forever to decide which CC Air Cushion I want to buy. I don’t know if going with Iope brand is the best for me, but I wouldn’t know if I don’t try, right? I got the matte variation in W23. It came with a free refill inside the box – something I was not aware of when I bought it. Hahaha Got this for KRW 42,000. I will make a separate review when I start using it.

These socks are soooo adorable I just couldn’t resist!  I had to ask permission from Don coz he knows I still have a lot of unused socks which I bought in Hong Kong a few years back. (Read Hong Kong Steals.)  These socks are actually bought from 2 different stores: The top row were from Migliore Mall in Dongdaemun for KRW 1,000 each (5+1 deal).  The bottom row, which I bought first, were from an Insa-dong store for KRW 1,500 each.  A very small difference in price, but with the 5+1 deal (or a better one if you buy in bulk), you’ll probably get a lot more from Dongdaemun. 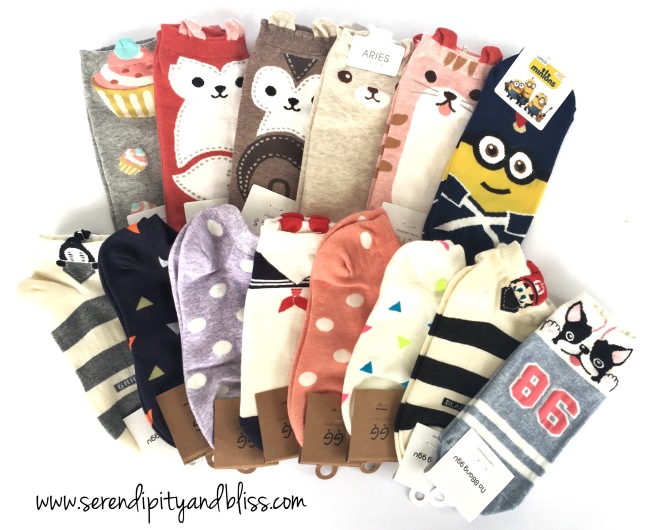 While waiting for my mom while she was in a store, I noticed a group of people hovered in the stall beside me. And you know that when there’s a crowd, something is up!! So I went and saw 2 men making these. Kkultarae is a a Korean dessert made from fine strands of honey with fillings inside – usually mixed sweet nuts, but they come in chocolate and matcha variation also.  One of the guys started talking to me asking me where I’m from, what the product was made of, how much it cost, etc. Then I asked if I can have a free taste and he happily handed me a sample.  I called Don, my mom and brother to have a taste also!  They have deals of 6+1 and 10+2: any variant you want.  The chocolate flavored on is more expensive than the mixed nuts and almond flavor.  After haggling, we got a great deal of 20+5! Shhhh… It’s just our secret! Hahaha We have yet to taste the chocolate variant, but the mixed nuts and almond and superb! The mixed nuts and almond cost KRW 5,000, while the chocolate cost KRW 7,000.  A few stalls down, we found another vendor (in photo) and he had the matcha flavor, which the first vendor didn’t have. He also made a demo of how the honey strands are made.  Entertaining indeed! 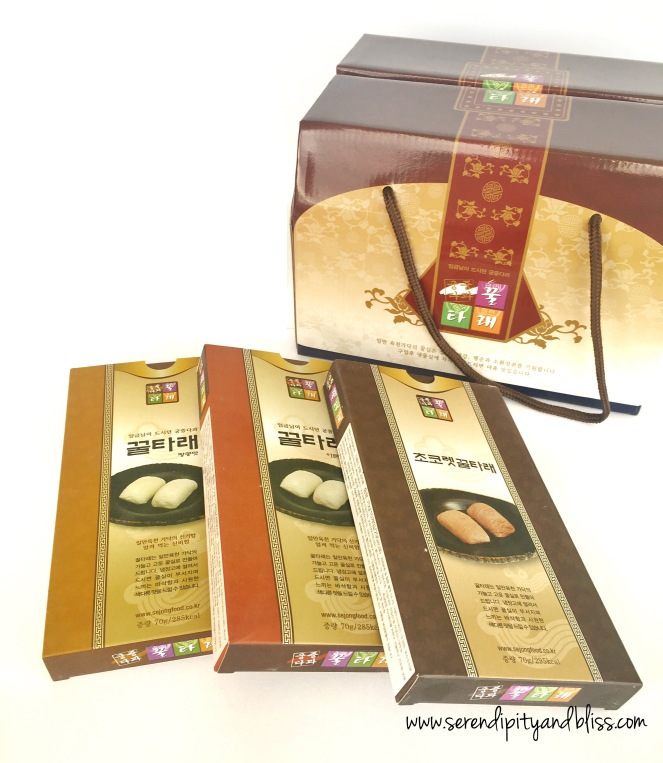 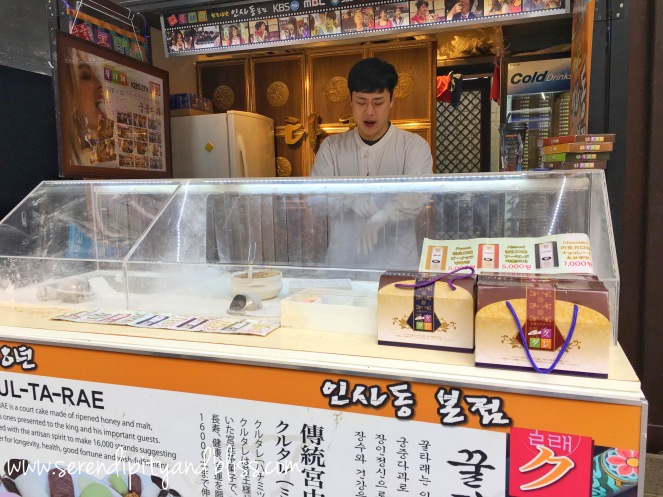 The main reason for wanting to go to Lotte Mart: to buy Parklon Kitchen Mat. The AirBnB we stayed at had one in the kitchen and it was so comfortable to stand on – I wanted one for myself.  I bought this for KRW 16,900.  My mom asked me to buy her a couple for her new house.  Now I don’t have to stand on cold kitchen floor while washing the dishes!

I also wouldn’t go home without Market O goodies! I bought the Lucky 8 Pack bag instead of individual boxes. This lucky pack has 2 boxes of each variant. I had to remove of them in their individual boxes to save space on our luggage.  This pack cost KRW 16,900.

The red ones are Korean Lotte Choco Pies! I bought 2 boxes (bundled together) for only KRW 3,000.  I gave one box to my mom and half a box to my sister – they both love these!  The 3 odd ones from the pile are also choco pies, but I’m not sure what brand they are.  These are free stuff from the AirBnB house.  The green ones are Lotte Almond Pocky Sticks.  I bought the 4-pack box and gave 2 packs to my brother.  I can’t remember how much this costs though.

There were a lot of Skin Food stores all over Korea, but I couldn’t decide if I want to buy this or not.  So on our last night, I finally decided to buy this from Lotte Mart.  This is their Salmon Dark Circle Concealer Cream #1.  This is similar to NYX’s Dark Circle Concealer that I bought 1-2 months ago.  Again, I will review the product in a separate post.  This cost KRW 8,000.  And I got free samples, too!

I bought this onboard our flight home.  Lifetrons Power Fusion is a Bluetooth speaker and Powerbank in one!  Came with a storage pouch, which does not only store the device, but has a pocket for the charging cable as well.  Bought this for USD 79 or about KRW 96,000.  So far its performance is good.  I have only tried the speakers, but will use the power bank feature in a few days when I decide to leave the house!