In my years of experience in online shopping, I have not encountered “bogus” sellers.  Until now.  Well, it’s not really bogus, but it was close to that.

WEDNESDAY, MAY 20: I bought clothes for our dogs via @arfarflove.  I chose 10 clothes in total.  I paid as soon as I finalized my orders, all in either Medium or Large in size.  The seller said she’ll have it picked up by courier the same day and I might receive it the next day.

THURSDAY, MAY 21: As soon as I got home from work, I asked the receptionist if they received a package for me and true enough, it was delivered as promised.  However, upon closer inspection, I only got 8 pieces and one of those was the wrong design.

I sent a message to the seller and she said she would immediately rectify the mistake and will send the missing items the next day.  So I waited again.

FRIDAY, MAY 22: Guess what? It didn’t come.  Nothing. Nada. Zilch.  I asked the seller what’s taking so long and she said it was just picked up late that day.  Giving her the benefit of the doubt, I patiently waited, expecting the package to arrive the next day.

SATURDAY, MAY 23: Still noting.  By  now, the seller can’t be reached via SMS or Viber.  I tried calling her, but her phone is turned off.  I sent her messages, but she didn’t respond until the next day.

SUNDAY, MAY 24: She said her phone was broken and she had it fixed.  She insisted that the items is with the courier since Friday.  She said she followed up and is waiting for the response.  And then she didn’t update me anymore.  She couldn’t even provide me the tracking number of the package.

MONDAY, MAY 25: No package, no replies.  I looked up her profile on Facebook and Instagram if there are any recent posts and she was having a Bazaar during the weekend until today.  I was this close to going there and confronting her, but I still waited.  I sent her several messages, but I got no response at all.  I also saw several comments on her accounts, customers inquiring where their packages are.  I figured, I wasn’t the only one experiencing this fiasco.  I even asked for a refund.

TUESDAY, MAY 26: She finally responded.  She said that the person who’s supposed to deliver the package was absent since Monday that’s why it hasn’t been shipped.  Ridiculous, right?  The delivery guy doesn’t take the packages home, so why would it hinder the courier to assign another person to deliver the package??? She also gave me a tracking number, which was someone else’s package when I checked.  She then said, it was a typo and gave me another one.  And when I checked it on the website, there was no record of the package being picked up last Friday.  She even sent me a photo as proof (see photo below).  She said the courier will deliver it the next day, but it might be delivered late in the day.

This was the photo she sent.  Notice that she was covering the date with her thumb.  *To be discussed later on.

WEDNESDAY, MAY 27:  I tried calling the courier – all the contact numbers published on their website.  Nobody answered at all!  I got home from work at 9:45pm.  No package.  I sent her a message, but she didn’t respond.  At 10:30pm, someone knocked on my door.  Surprise, surprise!  The package is here!  Opened it, and all 3 were there.

This was the receipt that came along with the package.  She only sent it the day before.  I knew it!  I knew she was lying all along. 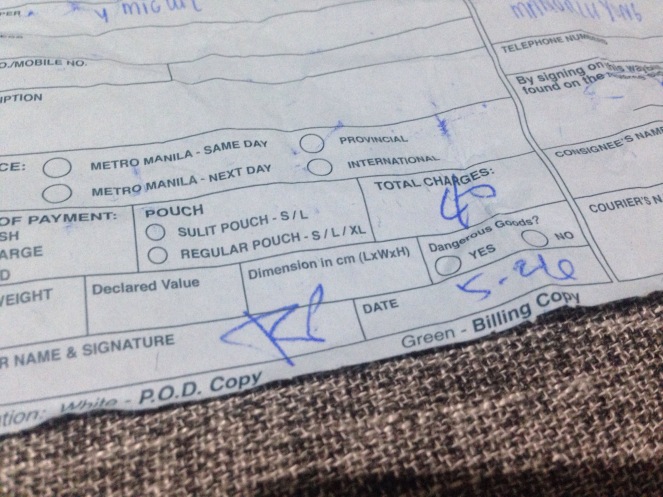 THURSDAY, MAY 28:  Sent her a  message saying one of the items was extremely small, obviously not a medium or large.  She no longer replied.

So I guess this is hopeless.  I may not completely stay away from online shopping, but I’ll definitely be cautious of such sellers.  Maybe a little background check is needed next time.

Here are all the items I bought, minus the one Chelsea is wearing on the second photo.  The top row are the large ones, the front row ones are size medium except for the one beside the tutu, obviously.

The Royal Blue one is what she got wrong, the courier was supposed to return it to the seller, but he didn’t get it from the receptionist. It was there for a week! They gave it back to me earlier today. At least I got something out of this, huh?

This may be just my very unpleasant encounter with this seller, but I still believe she wasn’t telling me the entire truth about the situation.  This post is not intended to ruin her reputation or anything.  I am just merely telling my story.